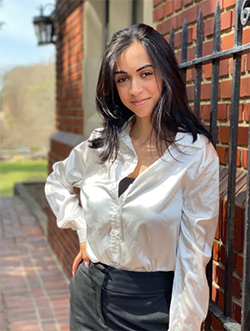 What Encouraged You To Start Arab American Heritage Month?

As a Freshman MAC Scholar, I was so excited about the different opportunities to indulge in intercultural education - but found it surprising that CMU didn’t have an Arab American Heritage Month integrated into its programming. Michigan is home to Dearborn which has the largest concentration of Arab Americans in the country, so why wouldn’t this culture be given a spot amongst the rest? After further research, it began to make more sense. Arab American Heritage Month wasn’t recognized at a state governmental level or even at a national governmental level. This culture suffers from an overall lack of recognition, which leaves room for a lot of assumptions and misinformation to spread about customs, norms, beliefs, etc. Since I obviously couldn’t go as far as to push for this recognition at the level of national government, I could eat at that problem by starting with changing what I can at CMU.

What Hopes Do You Have For It?

Why Is It Important for CMU to Celebrate and Educate Its Community About the Arab American Heritage?

Arab Americans are one of the most misunderstood groups of people in America - and this is secondary to how the media portrays the MENA region. It is important to combat the strong stigma already put in place by this country, because we as a culture have contributed a lot to so many developments in America. With knowledge on the culture, comes appreciation on how these values + customs have contributed to society today and highlights the needs of this underrepresented group. Arab American students in particular have been left out of academic discourse, leaving this population understudied in all aspects of research. Even in reference to support systems, counselors in the educational and clinical settings have not been trained to handle issues within religion, culture, and political contexts that are unique to this population. Knowledge allows for better advocates, and I hope that’s what this programming will bring.