Stacey Lim can be contacted at lim3s@cmich.edu

Dr. Stacey Lim, a professor in the Department of Communication Sciences & Disorders, researches the 1973 Michigan PBB (polybrominated biphenyls) contamination event and its effects on victims’ hearing and balance. PBBs are man-made chemicals that were formerly added to a variety of plastic products to make them less flammable. In 1973, the Michigan Chemical Company accidentally substituted PBB for magnesium oxide (a cattle feed supplement) and shipped it to dairy cattle feed mills across Michigan. By the time the contamination was noticed in 1974, PBB had already entered the food chain through contaminated livestock, exposing millions of people.

Prior research found that individuals exposed to PBB had long-lasting health issues such as nausea and abdominal pain. Individuals exposed to PBB have also had increased rates of breast cancer, digestive system cancers, lymphoma, as well as other health issues such as infertility, thyroid dysfunction, miscarriages, etc. In some cases, these health issues are also present in the children and grandchildren of those exposed. While much research has been done concerning the broader health implications of PBB exposure, much less is known of its effect on hearing and balance.

To see if there is a connection between PBB exposure and hearing or balance-related issues, Dr. Lim is developing a survey to share with those affected by the 1973 incident. From there, she and her students will conduct various tests to detect any patterns in hearing loss, balance issues, or other auditory 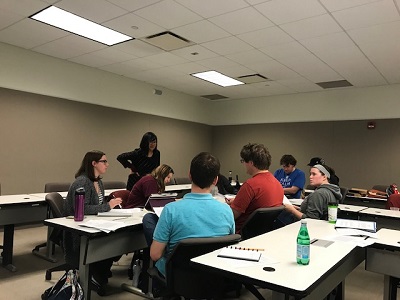 disorders. If possible, Dr. Lim also plans on testing the children and grandchildren of those affected. She expects the testing will reveal higher rates of auditory issues in the individuals exposed to PBB compared to the general population.

Dr. Lim first became interested in studying PBB after working with a atient who believed their hearing loss was a result of PBB exposure. After this experience, she reached out to Dr. Brittany Fremion from the Department of History to learn more about the topic. To their knowledge, no prior testing had been done on PBBs impact on hearing. Motivated by this, Dr. Lim joined Dr. Fremion in working on a research project with Emory University. While the project is still in its beginning stage, Dr. Lim hopes to use her expertise to provide insight into the impact PBB exposure has on hearing.