Evan Woolbright, a graduate ​​English Composition and Communication student,  examines the role American media plays in challenging and reinforcing society’s expectations of male masculinity. In over one hundred years of screen media, audiences have seen very little changes in the representations of masculinity. Oftentimes, male characters fall into the harmful stereotype of being emotionally stoic and physically violent. The few times that they do exhibit vulnerability, it is capped at what is considered an acceptable amount of male expression. To explore this idea further, Woolbright analyzes representations of and audience engagement with masculinity across a variety of mainstream media, specifically television. 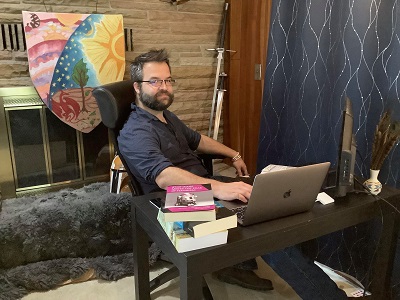 Woolbright uses insight from American Studies, Gender Studies, Fan Cultures, and Media Studies to better understand masculinity in American media. He also relies on the analysis and comparison of characters in popular T.V. shows, video games, and other media. In doing so, Woolbright found that society’s views on masculinity are rooted in fear; the fear of opening up and admitting the need for help, the fear of appearing homosexual or less manly by displaying emotions other than anger. Anger and violence are acceptable emotions for men because history has embedded this idea that it is necessary for growth and progress; this translates into films, T.V. shows, and video games and becomes part of the hero archetype. These heroes, which are meant to represent the best of society, thus impact the standards of masculinity in the real world. As he continues his research, Woolbright will also explore the media’s portrayal of toxic masculinity, as well as characters who teeter on the edge of both heroism and villainy.

There is renewed hope in the value of media, Woolbright explains. If the media continues portraying more complex male characters, such as Ted Lasso in Ted Lasso and Sam Wilson in Falcon and the Winter Soldier, who break the boundaries of masculinity, male audiences may feel empowered to do the same. In doing so, American media can positively contribute to the growing conversation about male gender expression and pave the way to a more inclusive and accepting future.

This research was motivated by Woolbright’s own experience as a male. During his early twenties, he and many of his male friends felt lost and adrift in the world. He struggled to understand why his female friends seemed so much farther ahead by the young age of 22. This motivated Woolbright to continue his studies and seek out answers and provide clarity about male masculinity in America that had puzzled him years ago.