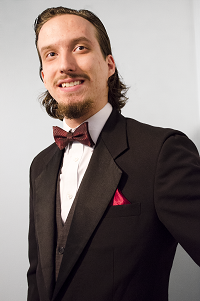 Joshua Daniels, a graduate student in the School of Music, researched how people perceive music. Daniels conducted a study in which the influence of paired crossmodal stimuli on perceptions of music was tested. Crossmodal pairing in music describes pairing audio with other sensory stimuli such as visual or kinesthetic, referring to movement. Using crossmodal pairing when presenting both classical and contemporary pieces, Daniels was able to measure how the music was perceived based on factors of musical familiarity, musical experience, and demographics.

Based on his research, Daniels found crossmodal pairings to influence how one perceives music. When trying on clothes and listening to music, audial-visual pairing can influence how the customer imagines themselves based on the mood of the music. Likewise, when observing a dance performance, the audience’s reaction may be influenced by the audial-visual-kinesthetic pairing of the music and the dancer’s gestures or expressions.

To better understand how these crossmodal pairings can affect musical perceptions, Daniels conducted a study comprised of CMU music students and faculty. First, participants were sent surveys where they indicated their gender, level of music education, and self-perceived music expertise. Then they were asked to rate audio-only excerpts from familiar classical music in addition to rating excerpts from unfamiliar contemporary music that was either audio-only or paired with a still or moving image.

Daniels’ findings confirm his hypothesis that musical judgments differ significantly between unimodal and crossmodal listenings. Both the classical and contemporary excerpts scored higher in overall pleasantness, beauty, and grace when paired with visual or visual-kinesthetic aspects. Additionally, in contrast to the female participants, the male participants rated the audial-visual-kinesthetic experience as less complex than the other pairings. These findings suggest that crossmodal pairings may be perceived differently based on one’s gender identity, something he did not expect.

Overall, Daniel’s research on crossmodal pairing in music provides valuable insight into how music is perceived and can potentially benefit fields such as concert programming, music education, and music performance.