Emilee Madison can be contacted at: 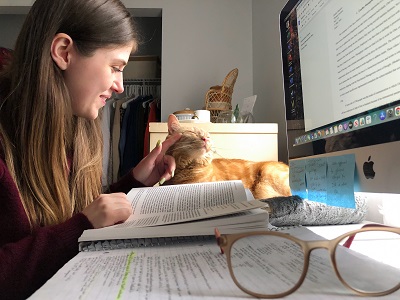 Political science graduate student Emilee Madison presented her research proposal, “An Intersectional Approach for Combating Societal Absolutist Thinking”, at the Ohio State Graduate Immersion Conference. Through her research, Emilee aimed to better understand absolutist thinking, a term defined by totality and close-mindedness, and its relationship with ethnocentrism, the idea that one’s ethnic beliefs are superior to another. Furthermore, Emilee argues that an intersectional approach, referring to the framework of a person’s social and political identities, such as gender, race, class, sexuality, religion, physical appearance, etc. that combine and overlap creating discrimination, is vital when combating societal absolutist thinking.

By taking into account a wide range of variables Emilee was able to go beyond the limits of ethnocentrism and create recommendations for combatting absolutist thinking on a global scale. She asserts that by neglecting to consider these factors, the effectiveness of research becomes limited. Furthermore, Emilee’s proposal addresses the faulty nature of many current methods for combating absolutist thinking, highlighting how harmful ethnocentric biases can be as a result of not using an inclusive intersectional approach.

Emilee found her passion for political science during her sophomore year as an undergraduate student at CMU. Throughout her time as an undergraduate, her interests in behavior and political thought processes grew. Being a first-generation college student Emilee admits that she struggled at the beginning of her academic career, “It’s been a lot of “faking it until you make it” as a first-gen for me, but through the stumbles, I have been able to push myself farther than freshman Emilee could have imagined.”. Having recently earned her Master's degree in Public Administration at CMU, Emilee is now applying to Ph.D. programs where she plans to pursue her proposed study and further explore political psychology.