Listen to "What Did They Sing in Michigan?"

Michael Ignat can be contacted at:
ignat1ma@cmich.edu 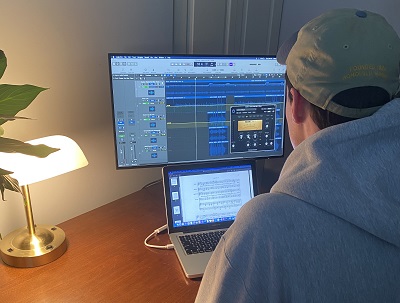 Michael Ignat, a graduate student completing his M.A. in Cultural Resource Management with a concentration in Public History, focused his thesis on the forgotten music of the American Civil War. Ignat relied on sheet music from 1860s Michigan to explore and interpret the messages behind the music of the era, specifically from music shared between families on the home front. Ignat believes that through music audiences can gain a unique insight into the civilian experience of Michiganders during the Civil war.

Ignat began his research by defining the role music played in the Civil War. Military bands, drummer boys, and traveling music groups produced music that served as social commentary to reflect on the war. The Hutchinsons singing group, for example, used music to publicly express their anti-slavery views and support the abolitionist movement. With contemporary re-recordings and transcriptions, much is known of the wartime music made on the frontline and the road. However, less is known of the musical experiences of families on the home front, specifically in less-populated areas.

Informal parlor music or music played at home, was socially and emotionally important for families and communities during the Civil War. With the economic expansion, mass production of musical instruments, and the efficiency of the printing press, more middle-class families had access to instruments and sheet music than ever before. However, due to a lack of audible examples of these songs, public engagement is currently limited to those who read sheet music.

Ignat found that with bigger cities like Boston, Chicago, and New York music produced during the Civil War era has been subject to contemporary re-production. In contrast, wartime music from less-populated areas, such as Michigan, had lacked audible representation and therefore was excluded from the narrative. Ignat shared, “It’s a real shame that none of Michigan’s [Civil War era] songs can be heard”.

To help fill these gaps and make learning about 1860s Michigan music more accessible to the general public, Ignat created an album of 10 songs, titled “What Did They Sing in Michigan?”. This collection of re-produced parlor songs allows audiences to gain a better understanding of the attitudes and prejudices many middle-class Michiganders had towards the war. By connecting communities with audible examples of the music, those interested in Michigan’s Civil War history will no longer be limited to the interpretation of films and re-enactments.

Ignat collected 10 pieces of wartime sheet music from the Burton Historical Collection in Detroit and various online sources. Using the program MuseScore, Ignat transcribed the sheet music and electronically produced the piano part of each song. He then used six volunteer singers, two of which come from the Mount Pleasant community, to record the rest of the scores. Due to the COVID-19 pandemic, Ignat was only able to meet face-to-face with two volunteers in a socially distanced setting in the CMU Music Building. During the recording phase of the process, he emphasized the old-fashioned, operatic style of the singers to be as accurate to the time period as possible.

Ignat’s lasting contribution will be to use music to help fill gaps in history and broaden audiences’ understanding of Michigan’s nineteenth-century wartime experiences.