Skip to main content
View All
Daniel Carlsen can be contacted at:
carls1dp@cmich.edu

Where has the Rice Gone? 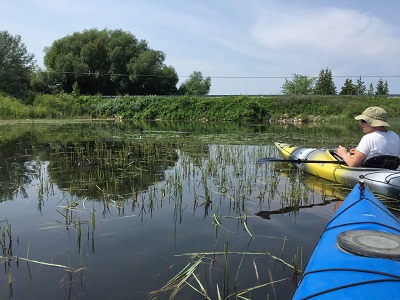 Second-year biology graduate student Daniel Carlsen is continuing his research on finding genetic strains of wild rice (Zizania palustris [Northern wild rice] and the state threatened Zizania aquatica [Southern wild rice]) unique to Michigan. Although wild rice plays an important ecological role in aquatic ecosystems, providing habitat and food for muskrats, fish, and waterfowl, it has been declining across the state of Michigan for many years.

Wild rice also has cultural significance for Native American tribes. The rice, or manoomin, facilitated the colonization of Michigan by Native Americans. Annually harvesting seed from the rice allowed for subsistence throughout the winter months. As one of their staple foods, it became a major component of many tribal ceremonies in the Great Lakes region.

Previous research showed that there are genetic strains of wild rice that grow exclusively in Michigan. Little is known yet about the genetic differences found in the rice populations of Michigan’s Lower Peninsula, other than they have not been found elsewhere in their ranges. This has raised the thought that the isolation of Michigan’s Lower Peninsula by the Great Lakes, may have allowed wild rice to develop unique adaptations to the growing conditions in Michigan, represented by these genetic differences.

Carlsen has finished collecting data and is now in the lab analyzing the samples. From this project, they will hopefully find more areas where populations with these differences may still exist and investigate their possible arrangement throughout the Lower Peninsula. This would hopefully work to eventually provide them with seed sources that are better suited for life in the Lower Peninsula and give us a more targeted idea of "what should go where" when considering future conservation efforts.