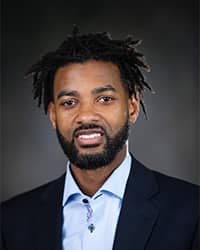 Isaiah M. Oliver was appointed to the Board of Trustees by Governor Gretchen Whitmer in April 2019 with his term expiring December 31, 2024. Mr. Oliver is the President and Chief Executive Officer for the Community Foundation Greater Flint, a $257 million public charity focused on engaging people in philanthropy to build a stronger community. He leads the Foundation’s strategic priorities around improving literacy rates, increasing access to healthy food, strengthening resident-led neighborhood improvements, and providing critical resources to the children affected by the Flint Water Crisis.

Born and raised in Flint, Mr. Oliver's background includes extensive community leadership and executive oversight experience. He served five years on the Flint Community Schools Board of Education, including two years as board president. His executive experience also includes serving four years on the Hurley Medical Center Board of Managers. He previously served as Associate Administrator for Workforce, Community and Grant Development at Mott Community College. Mr. Oliver advocates for an inclusive approach to philanthropy that listens to and works with the people of the community in order to develop a true partnership.