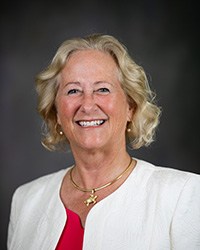 Prior to her appointment at CMU, Mathews led the Rubenstein School of Environment and Natural Resources at the University of Vermont, serving as its dean for eight years. Her leadership of the Rubenstein School focused on building academic excellence, with an enduring commitment to environmental justice, to prepare students to lead in a rapidly changing world. Through Mathews’ advocacy and partnership with the University of Vermont Foundation Officers, fundraising efforts in the Rubenstein School yielded nearly $29 million during her tenure as dean, which supported transformative initiatives and programs for students, faculty, and staff.

Before her deanship, Mathews spent nearly 20 years as a Professor of Wildlife Ecology and Environmental Studies at the University of Wisconsin-Madison. While at UW-Madison, Mathews served in many leadership roles, including Director of the Morgridge Center for Public Service, chair of the Conservation Biology and Sustainable Development program, and director of the 2009 Higher Learning Commission’s Institutional Reaccreditation for the University.

In addition to her academic leadership, Mathews served as a member of the Executive Committees of the National Association of Forest Research Programs and the National Association of Fish and Wildlife Programs Research Programs. Mathews also served on the board of directors of the International Crane Foundation for nine years and as an elected Trustee to the Higher Learning Commission.

Mathews received a Bachelor of Science degree in biology from Penn State and a Master of Science and a Ph.D. from SUNY-College of Environmental Science and Forestry. Mathews has published widely in the field of wildlife ecology and specializes in conservation biology and animal behavior.