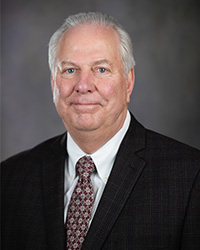 Edward J. Plawecki Jr. was appointed to the Board of Trustees by Governor Rick Snyder in October 2018 for an eight-year term expiring December 31, 2026. He currently serves as the General Counsel of the Michigan Practice and Director of Government Relations for UHY Advisors, a multidisciplinary professional services firm and currently the sixth-largest accounting firm in Michigan. He previously held the position of Vice President, General Counsel and Director of Government Relations for major automotive corporations over the past twenty years. His recent activities have included involvement with the GM and Chrysler Bankruptcies and the City of Detroit Chapter 9 Bankruptcy. Prior to his private sector work, he held several governmental positions, including a Judge, Wayne County Commissioner, SEMTA Board Member, Deputy Mayor, and Adjunct Professor at UM. He is also a well-respected arbitrator as a member sitting on several American Arbitration Panels since 1985. He graduated Cum Laude from CMU in 1975 with a BS in Education and majors in mathematics and history. Mr. Plawecki and his wife Terry live in Plymouth, Michigan.